Always was, always will be, Aboriginal land 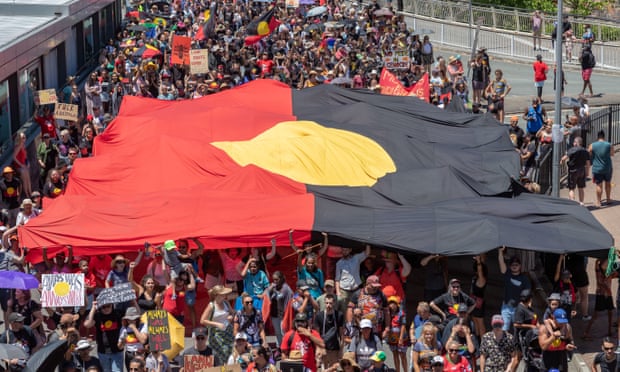 DCAN acknowledges that there can be no climate justice without justice for First Nations peoples. To achieve this, we need to put an end to the brutal impacts of colonisation and racism. Traditional Owners have cared for Country for tens of thousands of years. They continue to inspire us with their strength, resilience and resistance - leading campaigns to protect Country and sacred sites from the destructive practices of fossil fuel mining companies.

Today marks the landing of the First Fleet at Sydney Cove and the beginning of the colonisation, dispossession and violence that has continued to the present day.  We stand in solidarity with First Nations Peoples on this day of mourning and acknowledge that sovereignty was never ceded. We especially acknowledge the Wurundjeri Woi Wurrung People of the Kulin Nation as the traditional owners of the land that we carry out our activities. We pay our respects to their Elders past and present and commit to working alongside First Nations Peoples as we chart a shared path toward a sustainable future.

We invite you to join us in taking the time to reflect, learn and take action - not just today, but over the coming weeks and year. We've put together some resources to help you on your journey:

Listen
To the stories, experiences and journeys of First Nations people - NITV /SBS are dedicating a whole day of programming today. You can watch here: https://www.sbs.com.au/ondemand/channels/nitv

Learn
About First Nations people and history, which is the history of Australia. The Aboriginal Tent Embassy just celebrated 50 years, learn more about it here: https://theconversation.com/a-short-history-of-the...

Sites like the Colonial Frontier Wars detail the violence that has been perpetrated against First Nations Australians: https://c21ch.newcastle.edu.au/colonialmassacres/

Learn about the custodians of the land and water you are living on from AIATSIS: https://aiatsis.gov.au/explore/map-indigenous-australia

Learn about incredible First Nations leaders who have contributed to our communities, our country and the world who have been recognised with a National NAIDOC Award: https://www.naidoc.org.au/awards/winner-profiles

*With thanks to information provided by the Australian Conservation Foundation, #StopAdani and Fair Agenda.