The DCAN Dispatch for August

Welcome to this month's edition of the DCAN Dispatch, featuring information about how you can get involved in the forest protectors campaign, updates on the Gas Substitution Roadmap and new Climate Bill, and upcoming local events.

Logging is criminal in a climate emergency 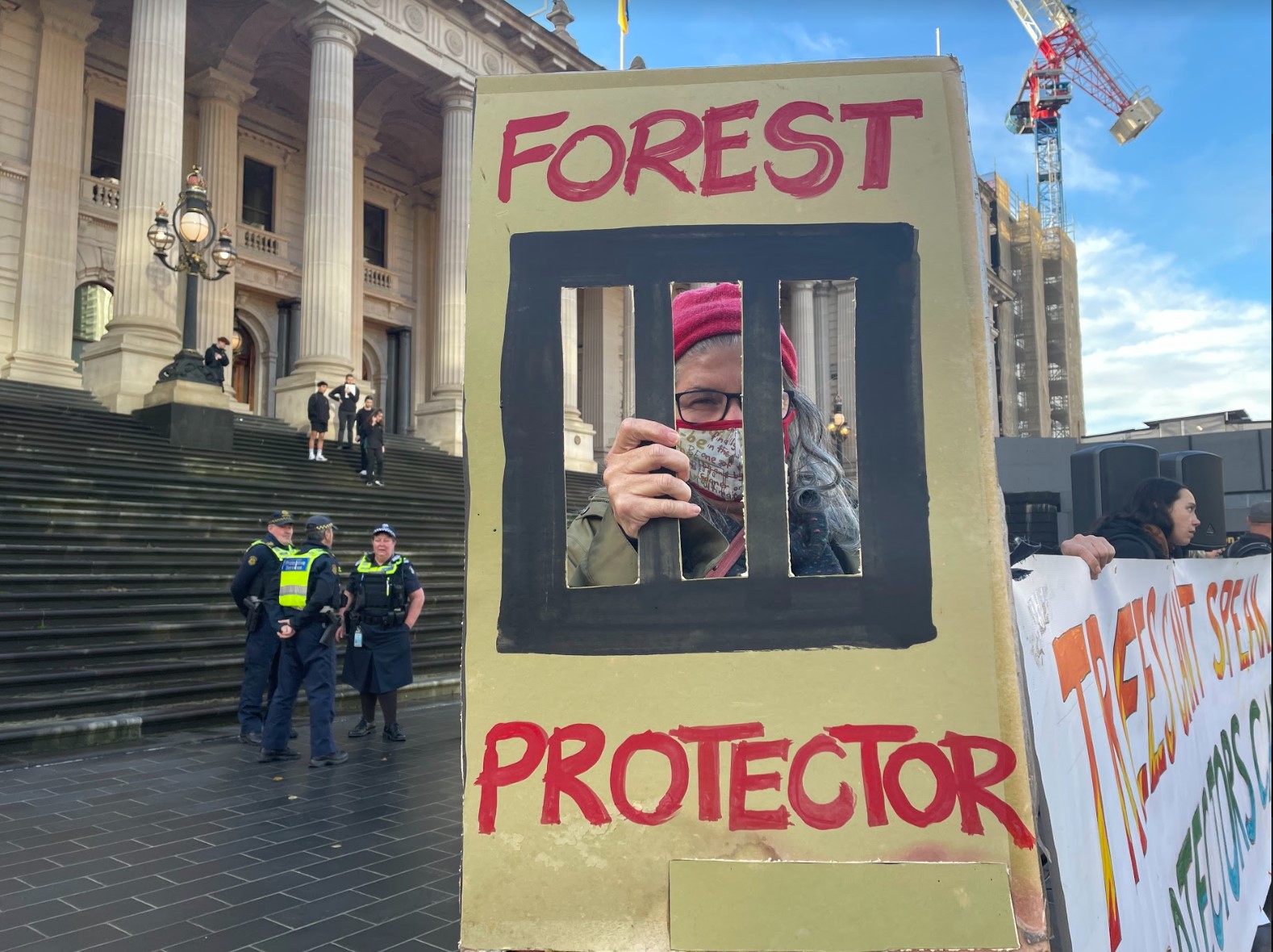 Labor and the Coalition recently joined forces to push draconian new penalties for forest protectors through the Victorian Upper House. If we protest peacefully in a logging coupe, we now face fines of up to $21,000 or 12 months in jail. Citizen scientists and whistleblowers monitoring logging and searching for endangered wildlife like the Greater Glider and Leadbeater’s Possum could also face these harsh penalties.

Over 4,000 people signed an online petition or emailed the Premier calling for the Bill to be scrapped, and 67 human rights, legal, environment, and climate organisations joined calls for the harsh amendments to be withdrawn. The Maritime Union of Australia, Australian Services Union, and the United Workers Union also delivered a joint letter to Premier Andrews criticising the new laws.

Climate groups and forest groups will be working together to make the protection of our precious native forests an election issue. There are postcard campaigns already underway in Northcote and Richmond and campaigns in other marginal seats are ramping up. Courageous activists will be staging large-scale peaceful walk-ins to logging coupes to test the new laws.

Contact us at [email protected] if you would like to help out with this campaign, or come to a forests evening at Black Spark, 126A Gladstone Ave, Northcote, the first Tuesday of each month from 6.30pm.

There are also a few Signal chat groups you can join to stay in the loop:

You will need to download the Signal app first, but that only takes a few minutes and gives you access to a free, encrypted chat platform. 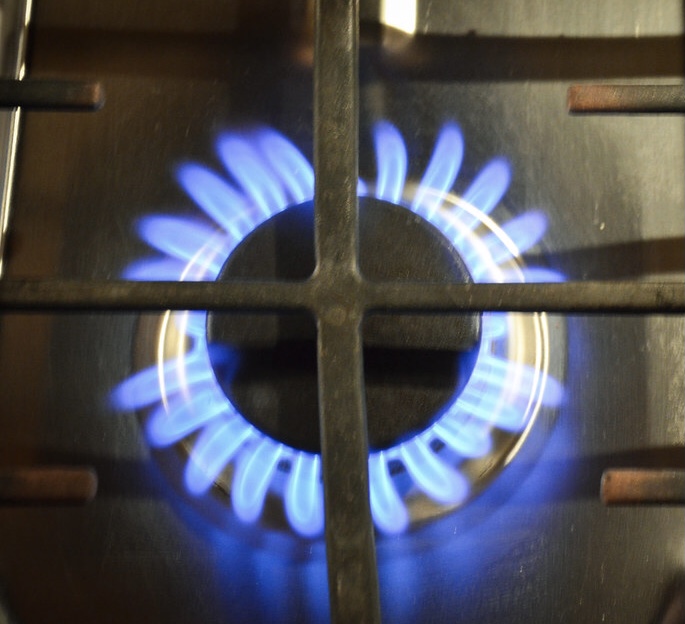 DCAN recently met with Victorian Minister for Energy, Environment and Climate Action, Lily D’Ambrosio, to discuss the Government’s new Gas Substitution Roadmap. The Roadmap is an important document as it sets out the Government’s plan on how we will transition to net zero emissions.

While DCAN welcomed some of the very positive announcements in the Roadmap, we expressed our concern at the lack of specific targets and timeframes needed to rapidly cut carbon emissions. We also spoke of our alarm at the inclusion of expanded and new gas projects in the Roadmap.

In response to our concerns, the Minister noted that the Victorian Government is decarbonising at a faster rate than any other jurisdiction. The Minister also reassured us that the Roadmap will be reviewed next year, with stronger targets. The Minister emphasised the Government’s commitment to ensuring that no part of the community is left behind in the transition to renewables. DCAN is grateful to local MP for Northcote, Ms Kat Theophanous, for setting up the meeting.

You can read about the outcomes of the meeting and see the briefing notes we have provided to the Minister for the August Energy Ministers’ meeting here. A review of the Roadmap by Friends of the Earth and guidance for email action can be found here. 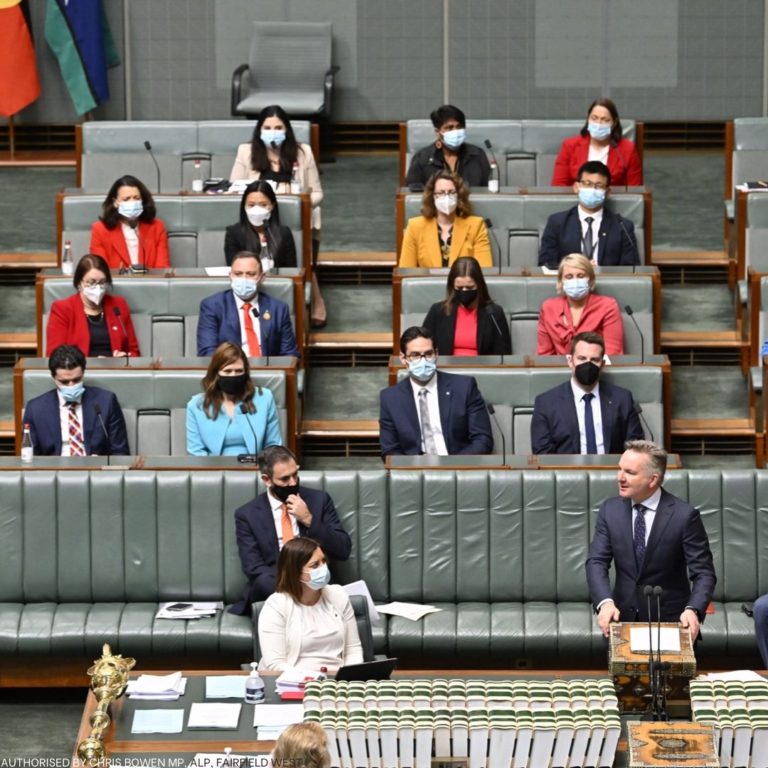 DCAN welcomes the passing of the new Climate Bill through the lower house of our national Parliament.

It is a monumental and important first step by the Albanese government. Let’s take a moment to celebrate this historic occasion which will send strong signals to the community and renewable energy investors. We must continue, however, to push the Government for stronger targets, an end to taxpayer-funded subsidies to the fossil fuel industry, and the ruling out of new coal and gas projects.

Communities around Australia and the world are facing increasing and widespread devastation from the climate emergency. We are going to need a truckload of stronger actions for a safer climate future. If you would like to be involved in this work please contact us at [email protected].

Read an explainer about the new Climate Bill here. 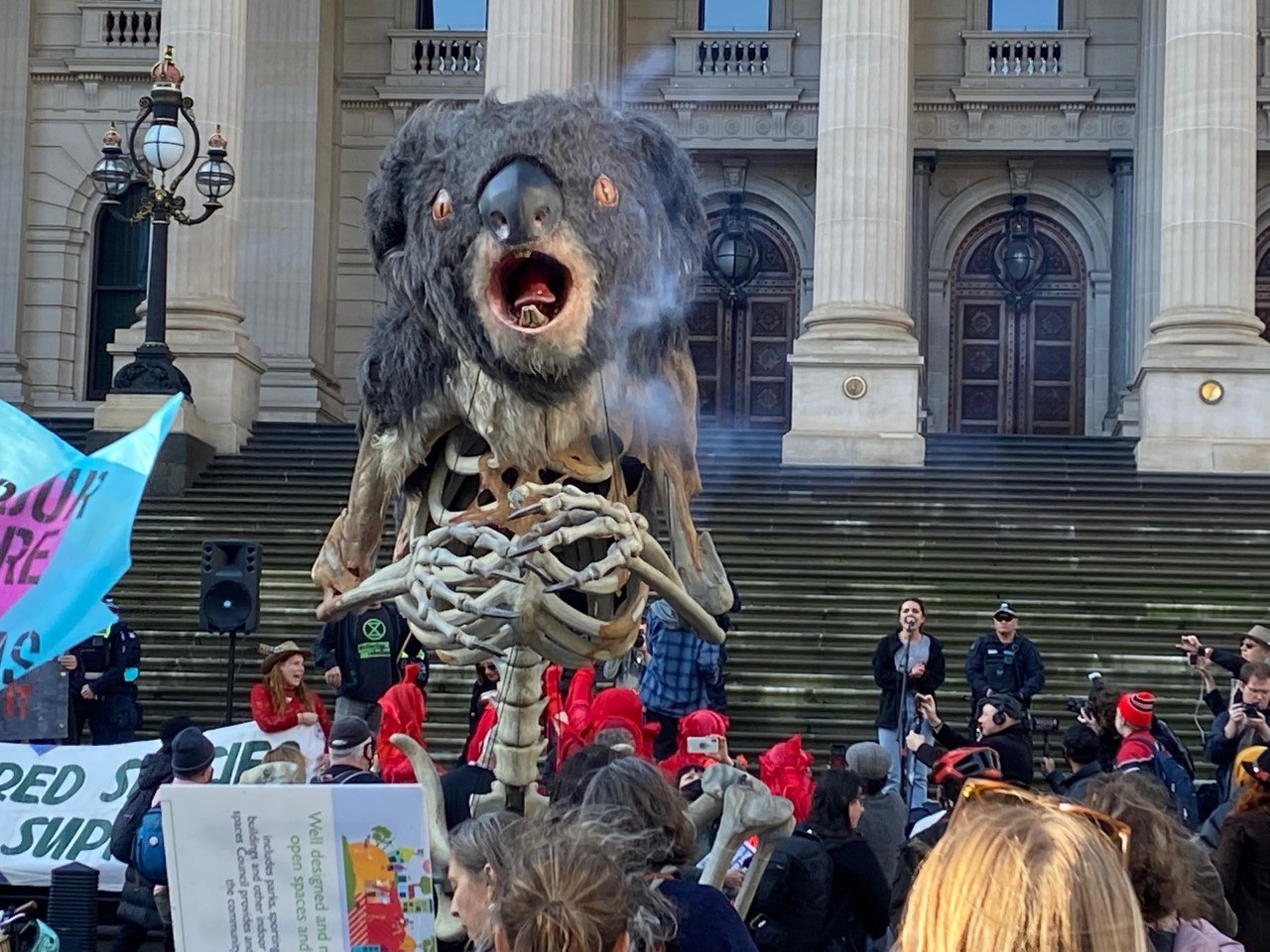 It was wonderful to see so many DCAN supporters join in the United Climate Rally calling for urgent climate action at the Melbourne State Library recently. DCANers were spotted singing in the fabulous Melbourne Climate Choir welcoming people to the rally while others were seen tuning into the great speeches and mingling with forest protectors, XR rebels, and even human-size owls! The Riff Raff Radical Marching Band serenaded us on the march up to Parliament House and we were also treated to some great reggae climate songs.

The distressing sight of towering Blinky the Burning Koala reminded us all of what is at stake for our precious planet and the need for each of us to step up and demand urgent action on climate before it is too late. 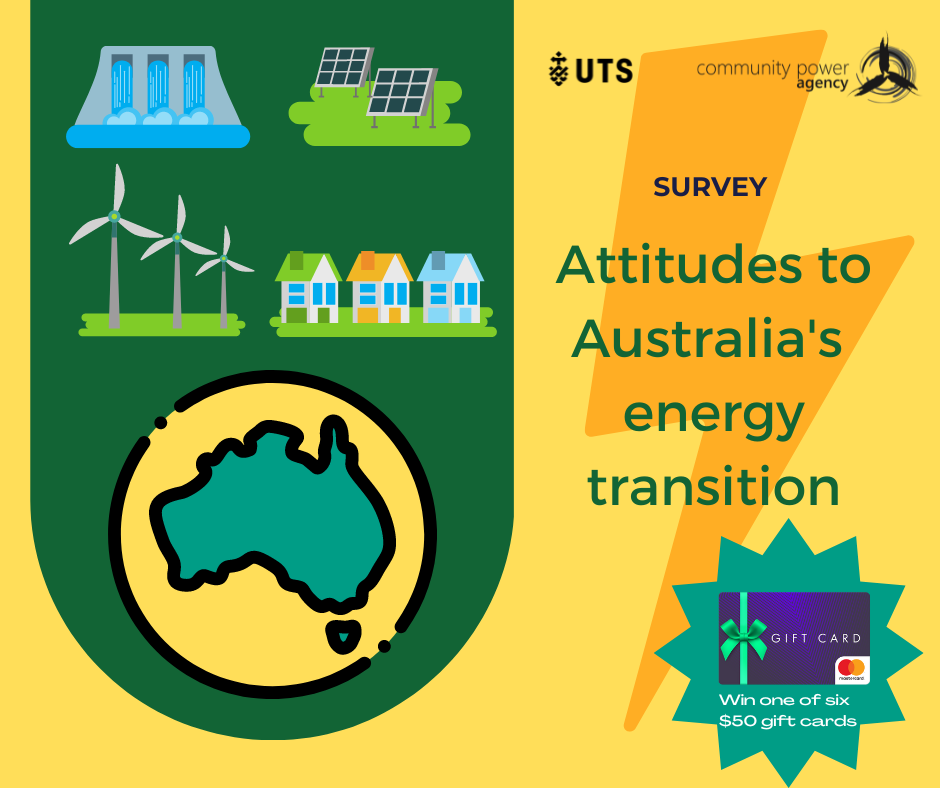 Individuals and communities are key to the energy transition. UTS and the Community Power Agency have launched a survey to find out what actions people are thinking about taking in the next year or two related to household and community renewables.

Fill out the survey here for a chance to win one of six $50 gift cards! 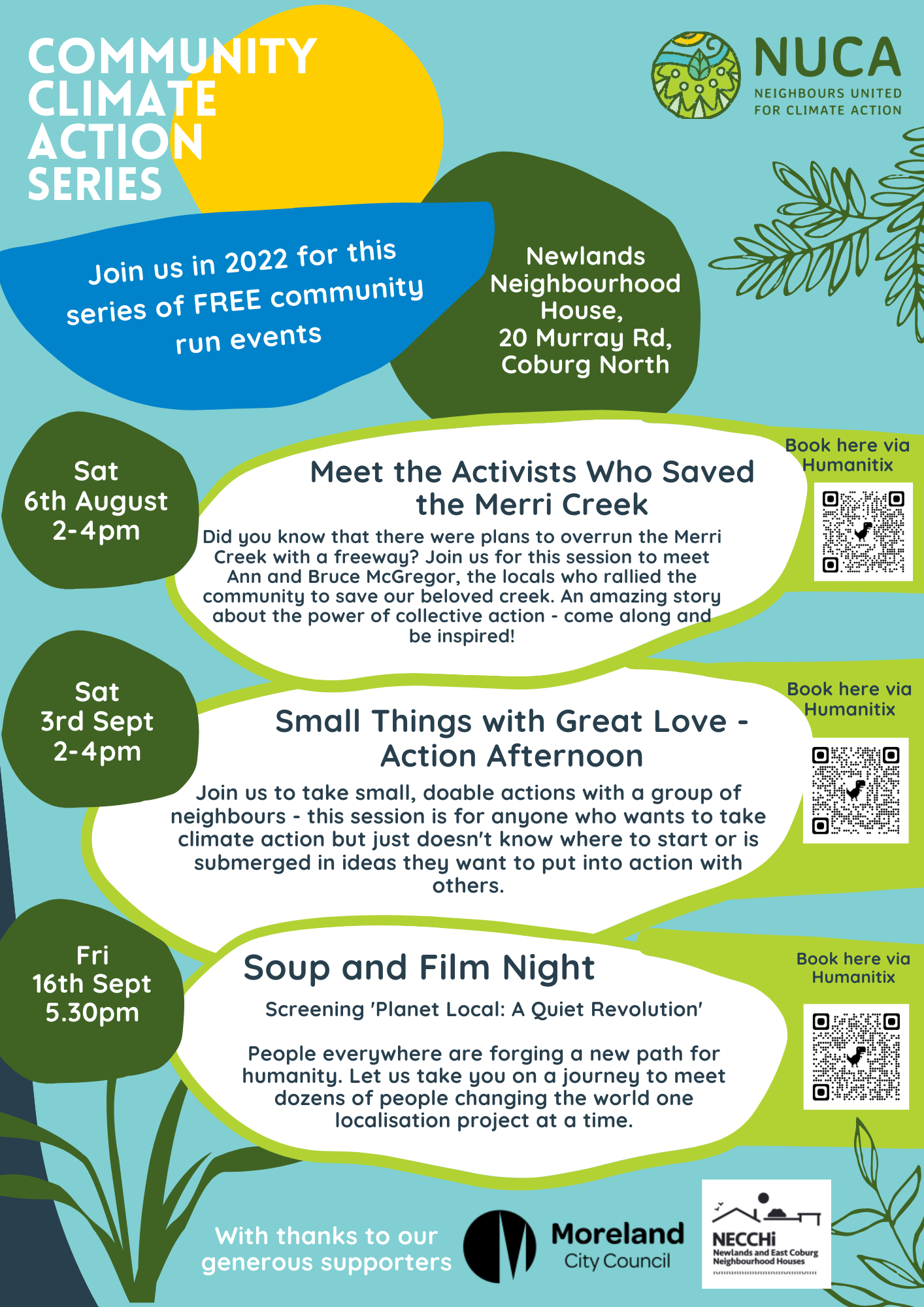 Here are some upcoming events for the Community Climate Action Series run by Neighbours United for Climate Action (NUCA), hosted by NECCHI, and funded by Moreland City Council.

Click here for the full event description and to register.

Click here for the full event description and to register.