Welcome to the last DCAN Dispatch of 2022, with updates on the Victorian election, supporting climate activists, our annual report, and more! Settle in with a cup of tea to reflect on our bumper year of climate action. 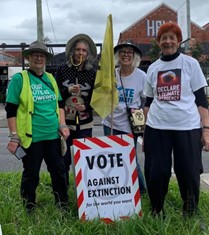 We ran a well-attended climate forum, letter-boxed 20,000 climate scorecards, handed out scorecards at railway stations, distributed hundreds of climate emergency and forests house signs and were an active presence during some of the days of early voting. Our climate voting guides included important information on the mysterious preferencing deals that dictate the end result for Victorian voters who opt to vote one above the line in the upper house.

The outcome has been a positive in many ways: Labor has been returned with a large and comfortable majority and will have little to fear from a weakened and directionless opposition. They have a strong mandate to implement their climate and energy commitments including the re-establishment of the State Electricity Commission to develop publicly owned renewable energy facilities. The Greens have held onto their three lower house seats and added Richmond. However, they narrowly missed out in Northcote and the three ‘teal’ independents who were seen as having the best chance, also lost in close contests.

The upper house results will not be available till next week, but it looks as though Labor may need to negotiate with the Greens to pass legislation and that would be a very good thing for speeding the transition away from fossil fuels and hastening the end of native forest logging. 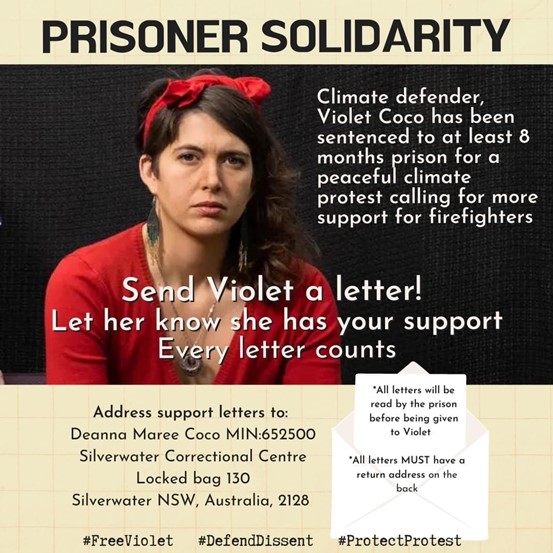 Climate activist, Violet Coco has been given a 15 month jail sentence with a minimum of 8 months for a number of charges including blocking a lane of the Sydney Harbour Bridge for 25 minutes with Fireproof Australia. She is the first climate activist to receive a long sentence under the draconian anti-protest laws recently introduced in New South Wales. Harsh penalties for forest protests are coming in Victoria and Tasmania soon too, so let’s give Violet as much support as we can by: 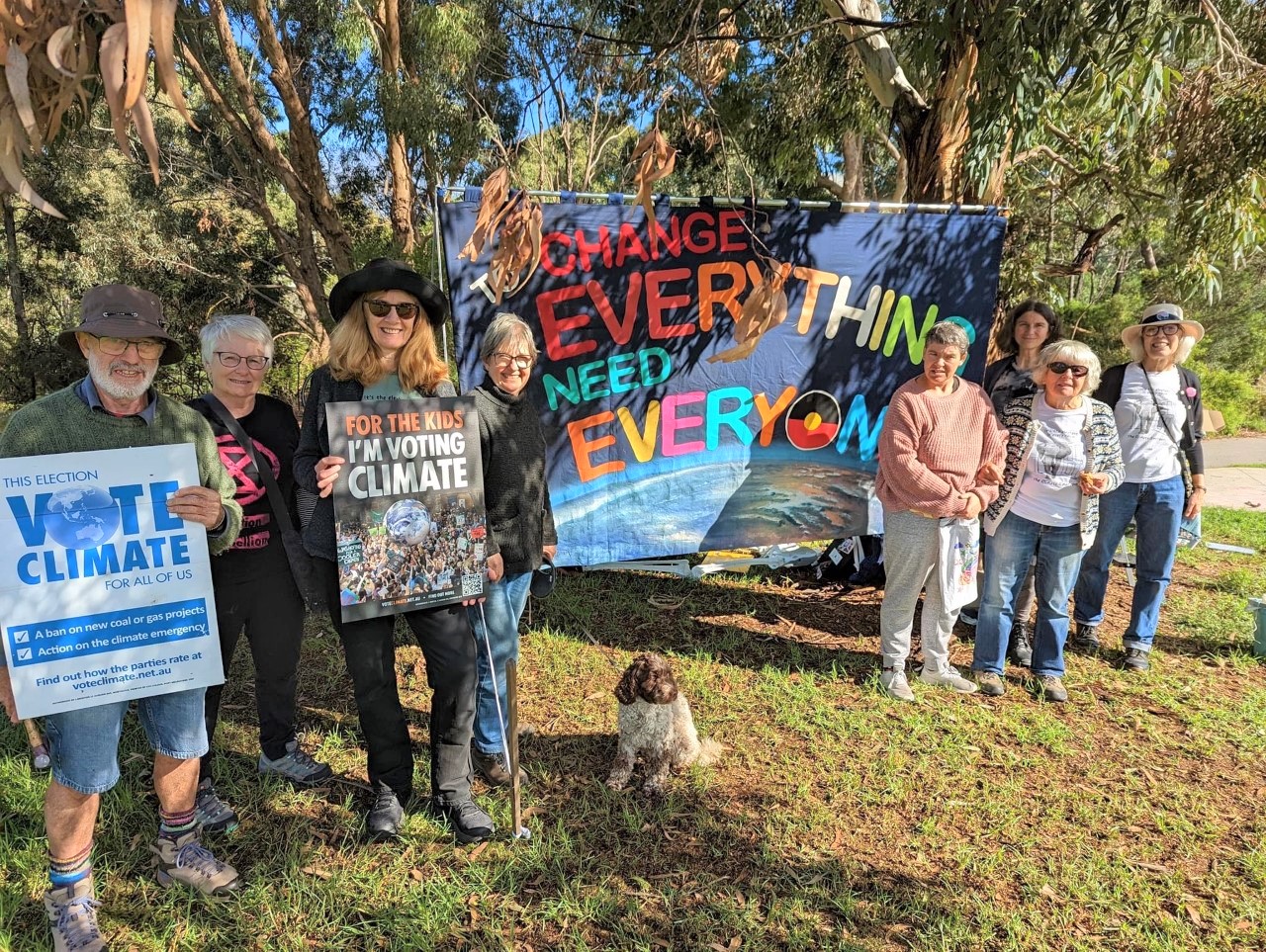 2022 was another very busy year for DCAN, packed with creative actions and events including working on two election campaigns. You can read all about our work in DCAN’s Annual Report which was tabled at the Annual General Meeting last week.

A standout highlight for the year was the Cultural Awareness training day with Uncle Bill Nicholson from the Wurundjeri Woi Wurrung Cultural Heritage Aboriginal Corporation. The training was a positive step along our path to working alongside First Nations People towards a safe climate future.

Speaking to the report, Convenor Ann Sanson gave special thanks to members of the Planning Group who led and participated in the local council, outreach, and election campaign working groups. Ann also referred to the very positive outcomes from our work with the Metro Community Power Hub, the Good Car Company and the Darebin Climate Alliance.

Ann concluded by thanking all the volunteers who participated in the election campaigns by letterboxing, handing out the climate scorecards, and distributing fence signs. She also expressed deep thanks to our many supporters who dipped into their pockets to help cover the cost of election scorecards and fence signs.

The success of the Darebin/Northern Melbourne EV community bulk buy project has led to an extension in the program to the 16th of December!  So if you are interested in what's on offer it's not too late! Check out the details of the Bulk Buy opportunity here.

To date, more than 600 people have registered to participate in the program with 200 people turning out for the information-packed Show and Shine event in Bundoora.  65 people have taken test drives and 20 cars are currently in the process of being purchased - removing 50 tonnes of carbon emissions from local roads. If you missed the Show and Shine event you can watch it here.

The Good Car Company’s efforts to bring more affordable electric vehicles to Australia received a very welcome boost in October when Boundless Earth, a philanthropic venture, announced it was going to invest in the Company. With this investment, the Good Car Company is able to increase the number of EVs they import from around 200 per year to 2,000! This has already led to a greater variety of cars on offer which you can view on the Good Car Company website.

DCAN would like to whole-heartedly thank Kay Wennagel who worked tirelessly on behalf of DCAN to help coordinate and promote the EV program locally. We would also like to thank Darebin Council for the Community Grant which enabled us to partner with the Good Car Company in this exciting program.

We are also grateful to Yarra and Merri-bek Councils for their support.

Who are the Dirty Dozen and what can we do about them? 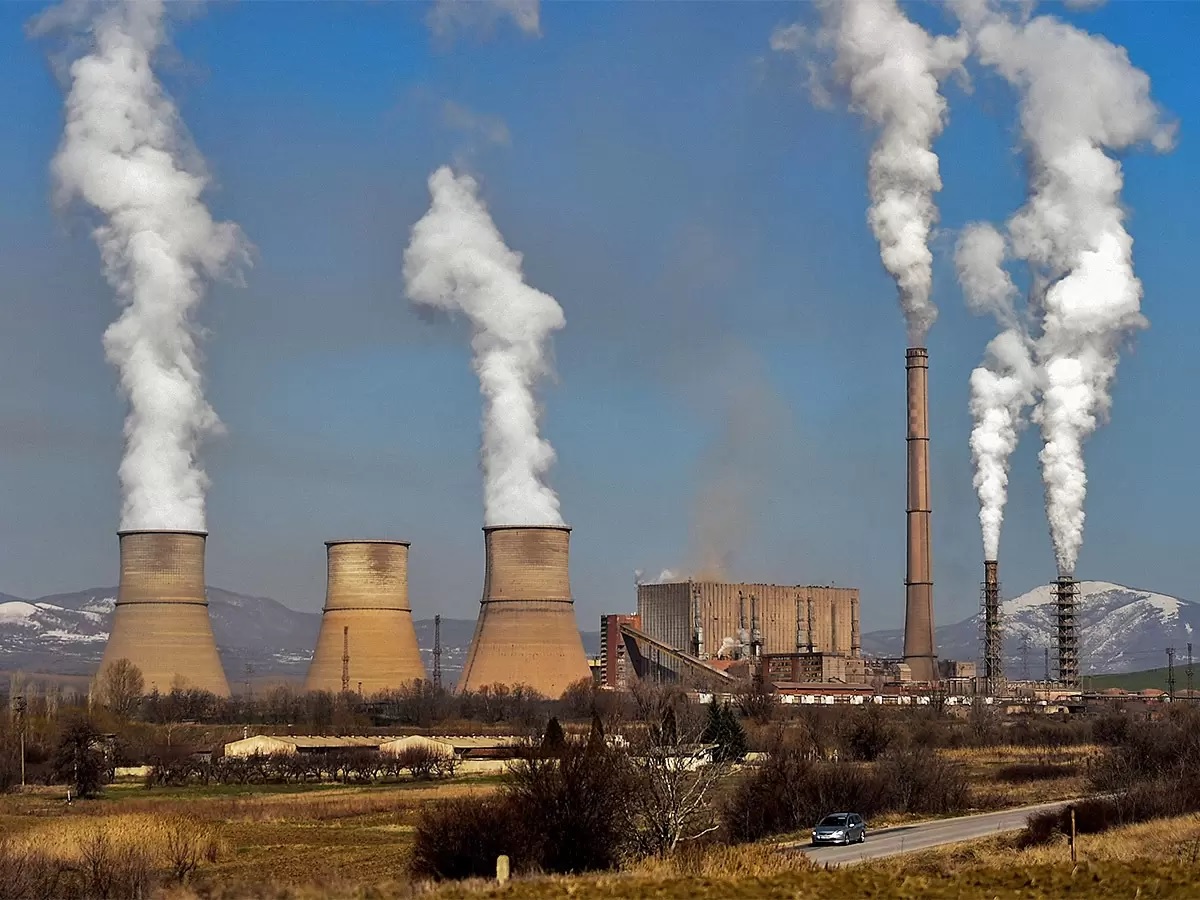 The Dirty Dozen polluters are the usual suspects of big coal, oil, and gas companies. Together, these fossil fuel companies are responsible for nearly half of the emissions covered by Australia’s Climate Safeguard Mechanism – the mechanism whereby the Federal Government puts a cap on industry emissions and drives these down over time. While the Mechanism did not make polluters cut emissions under the previous Coalition government, Labor has been elected with a mandate to strengthen the mechanism and plans to have updated regulations up and running by July 2023.

The big polluters have wasted no time in mounting a campaign to derail the Government’s intentions and dodge their responsibilities. They have put forward loopholes big enough to drive a coal truck through. It’s time for the Dirty Dozen polluters to pull their weight when it comes to tackling the climate crisis.

DCAN has signed on to the national campaign to draw attention to the Dirty Dozen’s terrible track record on emissions and to provide strong support for the Government in strengthening the mechanism to protect the climate. If you are interested in helping out with this campaign by writing emails to politicians and/or using social media please let us know.

Are you available to attend the Westpac AGM on Wednesday 14 December from 10am at the Melbourne Convention and Exhibition Centre? Our friends at Move Beyond Coal will be in attendance and we all know crowds make these events more effective.
Or there’s an online rally targeting the NAB on Thursday December 15th, 1pm- 2pm. But it’s not a meeting! It’s a rally!

Some DCAN members also attended the Extinction Rebellion protest to End Fast Fashion, held in the Bourke Street Mall on Black Friday, just in time for some Christmas not-shopping!

Thanks for reading and for supporting DCAN in 2022. We look forward to another year of action after a restful break.