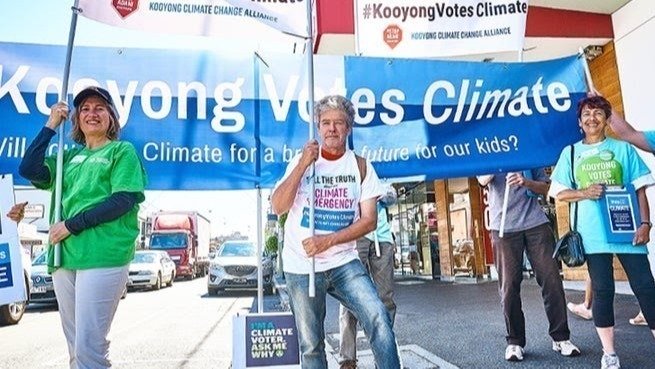 Long term friend and supporter of DCAN, Michael Staindl, is about to lose his family home due to a legal battle with his federal MP, Josh Frydenberg, the Member for Kooyong.

Michael has been campaigning for urgent action on the climate crisis for many years. DCAN supporters have had the privilege of rubbing shoulders with Michael at numerous events where we have also seen him take on leadership roles such as speaking at protests, delivering street performances and even dressing up as a dinosaur for regular Frydo Friday events outside Frydenberg’s office in Camberwell.

DCAN understands that it was Michael’s frustration and despair at the lack of action from Frydenberg on the climate emergency that led him to mount the legal challenge questioning whether Frydenberg was a dual citizen and therefore ineligible to sit in federal parliament. Michael hoped to bring about a by-election which would enable the voters of Kooyong to show they wanted genuine action on the climate crisis.

Michael’s legal action was unsuccessful and he has been ordered to pay Frydenberg's costs of $410,000. Frydenberg’s lawyers, Arnold Bloch Liebler, who reportedly earned more than $100 million from federal government contracts in the past year, may have acted pro bono for him.

Frydenberg has the power to stop this travesty of justice. He can simply forgive the debt, or request that the Attorney General declare the case a matter of public interest and have the government pay the costs as it did in all the other dual citizenship cases.

As citizens concerned about democracy and climate change we want Frydenberg to stop his punishing bankruptcy proceedings now, forgive the debt, and respond effectively to the climate emergency. You can read more details about the case here.

Please join us to help Michael and Kay save their family home and get natural justice.

How you can help: