The DCAN Dispatch for June 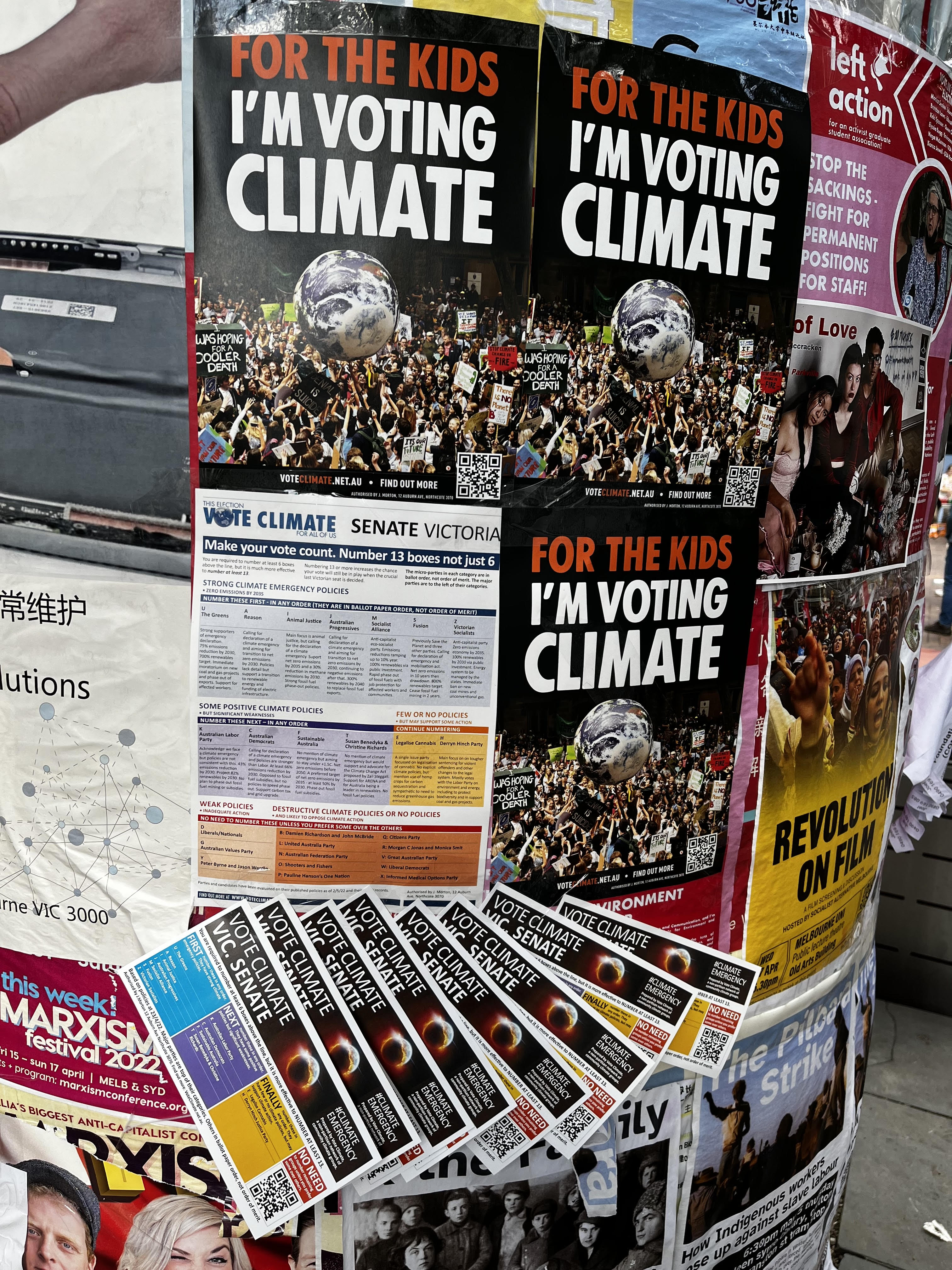 A huge thank you to everyone who worked so hard during the election campaign to bring about the election of candidates with strong commitments on tackling the climate crisis. Many DCAN volunteers worked tirelessly distributing our scorecards at the pre-polling booths and at polling booths on election day, as well as train stations and elsewhere. Many also chose to support Teal and Greens candidates in other electorates. You all deserve to take some credit for the fantastic election result!

The election results were an outstanding testament to the strength of grassroots community action across the nation. Here in Cooper, sitting MP Ged Kearney was returned but with a reduced margin. Ms Kearney has been an outstanding champion for climate action within the Labor Party. However, the swing against her of over 5%, along with the election of additional Greens candidates in both the lower and upper houses and the election of a raft of Teal independents, sends a strong signal that much more ambitious climate policies are needed from the new Labor Government.

We hope you share our feelings of relief and renewed hope for the future. Our work now is to ensure that the new Albanese Government understands that it is indeed a race – a race to bring down carbon emissions as quickly as possible and make the switch to renewable energy. Given how dangerous the climate is now, action to restore a safe climate needs to be taken with emergency speed and intensity.

We are looking forward to working with you to press the new Government to declare a climate emergency and put in place an emergency transition plan to protect our community.

And now it’s only five and half months to the Victorian state election! If you'd like to get involved, please let us know here.

Both houses of Parliament supported the SA motion. SA Climate Minister Susan Close introduced the declaration, saying: “What we need to do is acknowledge the truth that this constitutes an emergency, and then we need to act on that.” Well done to the SA climate activists who have worked tirelessly to bring this about! We hope our state and federal MPs are taking note.

No more new coal and gas

We were so excited to see our new Minister for Climate, Chris Bowen, giving a press conference beside the emergency leaders Scott Morrison had refused to meet with. But we were alarmed to see new Resources Minister, Madeleine King spruiking coal and gas. According to the Murdoch press, Minister King will not put a limit on how much coal it will export, saying it is possible Australia could be sending the resource to Asian trading partners past 2050. DCAN will be continuing our campaign against all new coal and gas projects.

As we turn our attention to the state government in the lead-up to the state election, we have been shocked by the first reading of a bill introducing draconian penalties (12 months’ jail or more than $21,000 in fines) for protesters attempting to protect our beautiful carbon-dense forests from logging.

We view the proposed legislation (the Sustainable Forests Timber Amendment (Timber Harvesting Safety Zones) Bill 2022) as unnecessary, undemocratic and totally at odds with a progressive Labor Government. We do not believe that there is sufficient evidence that existing protections for worker safety need to be supplemented by these harsh amendments.

In the face of the climate emergency and species extinction, we need to protect what few natural ecosystems we have left, not punish those who are trying to prevent further destruction. Please join us by voicing your concerns to local MPs Kat Theophanous and Robin Scott or click here to sign the petition. 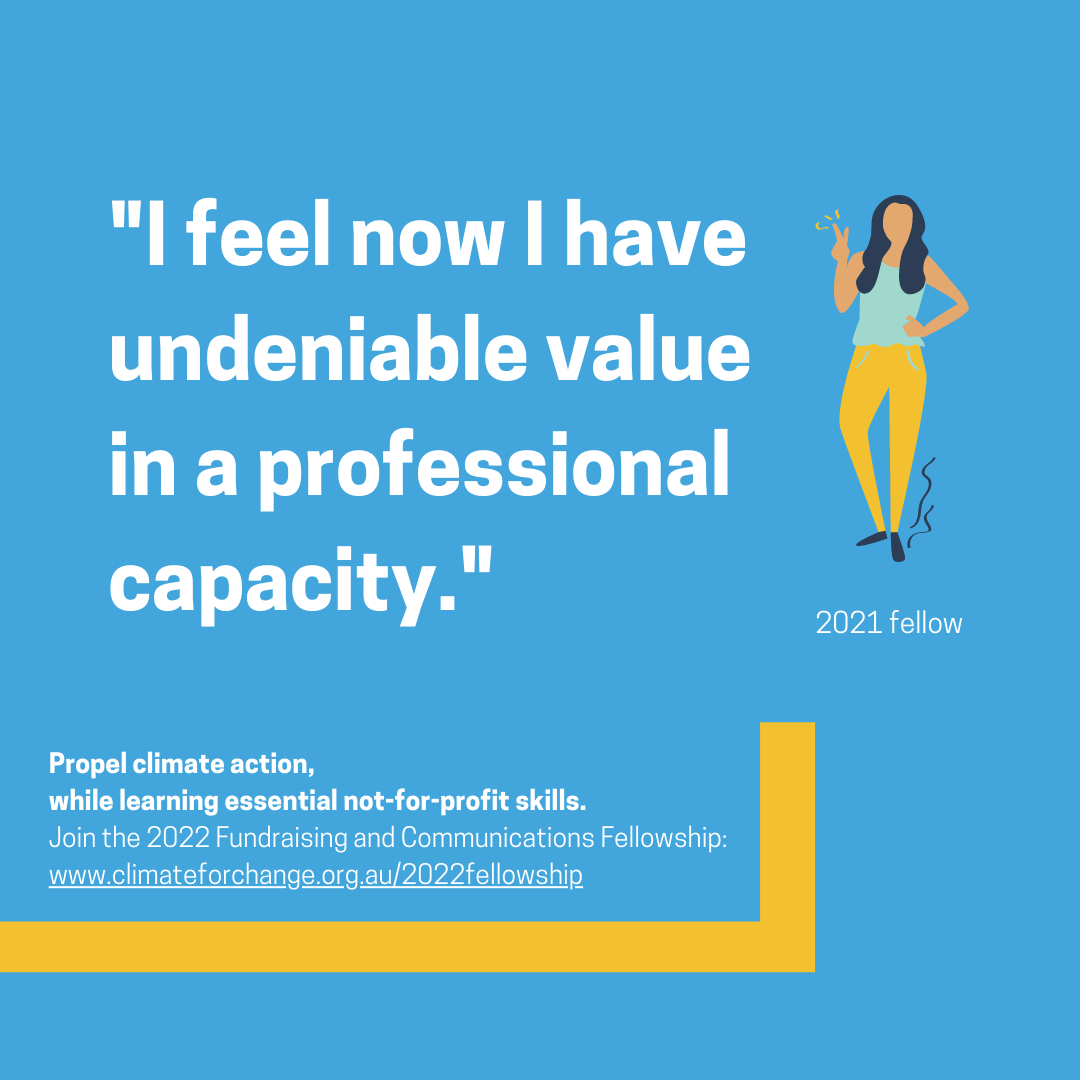 Climate for Change is now recruiting for its 2022 Fundraising and Communications Fellowship. Build your capacity to act for a better world through their training program of weekly online sessions, covering peer-to-peer fundraising, communication, climate action and other not-for-profit skills. Applications close 11pm Sunday 19th June. For more details and to apply, click here.

On Sunday 5th June, Lily D’Ambrosio, the Victorian Minister for Energy, Environment & Climate Change, launched a new Community Battery in North Fitzroy, the first for an inner-city area in Australia. With a capacity of 250kWh and featuring a cheerful mural by artist Hayden Dewar, it is connected to a local subnetwork of nearly 200 premises around its site at CitiPower’s substation at 193-205 McKean St. It will absorb excess solar energy from surrounding homes during the day and release it during the evening peak period, and help to stabilise the grid.

The launch marks a key milestone for the Yarra Energy Foundation’s (YEF) Community Battery Trial, which is supported by an $800,000 grant from the State government’s Neighbourhood Battery Initiative, as well as by the City of Yarra. Other battery projects are also underway, including the Village Power project here in Darebin.

DCAN is sad to learn that the Victorian Government’s budget for next year does not include funding to continue the program which funded the Metropolitan Community Power Hub (MCPH), along with a number of other Hubs across Victoria, for the last year. DCAN is one of 10 local climate groups that are Roundtable Partners in MCPH, along with 11 local councils.

Led by the Yarra Energy Foundation, the MCPH has helped many households to install solar panels and learn how to reduce their energy bills and their carbon footprints through things like installing heat pumps, insulation and induction cooktops. As part of the MCPH, we distributed thousands of fliers across Darebin, held information zoom meetings, received initial training in helping people understand their power bills, and held a demonstration of induction cooking. We were also looking forward to progressing a project to help make local neighbourhood houses more climate resilient.

Funding for the MCPH comes to an end on 30 June. While we are trying to encourage the state government to reconsider its funding decision, the MCPH has been a valuable way for DCAN to build relationships with other climate groups and to spread the word about how to reduce emissions at a local level.

10am Thursdays on the St. George’s Rd bike path

Occasional showers and predictable cold have not really interfered too much with our regular outreach action. We have even had one of the good folk we accosted to talk about climate action insist on joining us in tidying the bike path by weeding and collecting litter. So we’ve added Colleen to our little email list. Let us know if you want to join us too!

Outreach, without the cleaning

Before the election some DCAN members used sandwich boards with climate messages to good effect in Kooyong and the city. Now, looking for new ways to keep the focus on this critical issue, we are looking at handing out our “Groups to join/Things to do” flyer in High Street Northcote, or anywhere really. We have already had one successful hour or so outside Terra Madre in Westgarth.

No local photos were taken but this one from one of the earlier outings gives the idea. Again, if you’re up for a bit of a chat with the general public, possibly in a sandwich board, please get in touch. (It looks daunting but the flyers make it simple. And you will be among friends.)